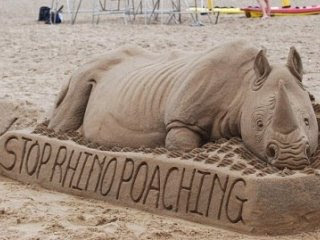 This is an open letter from Timbavati Game Reserve Chairman Tom Hancock regarding the limited hunting of selected rhino in that reserve. A recent controversy erupted when it was ‘discovered’ (although it has proceeded quite openly for years) that amidst the current and alarming rhino poaching crisis in South Africa, white rhinos were being legally hunted in this flagship reserve along the western boundary of Kruger National Park. Accusations flew and social media exploded with vitriol.


1)      Should an individual’s personal revulsion to rhino hunting translate into ban or cessation? I understand someone’s personal aversion to hunting, or hunters, but do these sentiments equate to sound conservation polices? Ironically, some of the most respected and erudite conservationists say no, antipathy to rhino hunting should not translate into bans because properly conducted it is a tool that has served the species very well.


2)      It is clear that illegal horn traders have fronted as ‘legitimate’ clients with shady outfitters and there is no doubt that this ‘loophole’ is a serious threat to the industry and credible conduct. I agree that this is a serious problem, driving any current benefits towards a zero sum outcome.


The letter makes their case quite simply. Draw your own conclusions:


“The Timbavati does not support the idea of stopping an activity which is legal, sustainable, scientific and professionally managed, supported by numerous conservation-oriented NGOs and research institutions, and which brings in the very revenue required to counter the uncontrolled and highly illegal scourge that is rhino poaching. For the Timbavati to be financially sustainable and for us to achieve our conservation aims and objectives we need sustainable sources of revenue whether it is from limited hunting, photographic tourism other sources.


Individual landowners do not benefit financially from any hunting which takes place in the Reserve and are prohibited from hunting commercially on their own properties. The Timbavati Association is a not-for-profit conservation organisation.


100% of the proceeds generated from sustainable hunting activities in the Timbavati are utilised exclusively for the conservation and protection of not only our rhino population, but also the protection of all fauna and flora under our custodianship.


Sustainable utilisation of our natural resources as practised by the Timbavati is legal, well supported by environmental legislation, government, and SANParks as well as by a large number of reputable, relevant research institutions and conservation-based NGOs [Research available on request]. Sustainable utilisation of natural resources by way of hunting is entrenched in the Policy for Buffer Zones to National Parks.


The general consensus of the scientific community and reputable conservation NGOs appears to be against an outright ban on the hunting of cats and rhino. CITES states that rather than trophy hunting having a negative impact on white rhino population, "available information suggests the contrary".


The Timbavati supports the findings of Endangered Wildlife Trust chief Yolan Friedman and Wilderness Foundation chief Andrew Muir who cautioned that a moratorium on rhino hunting could have “unintended and negative consequences which are prejudicial to the southern white rhino conservation as a whole”.


“To allow the continued expansion of rhino range and numbers, and so enable overall numbers in the country to grow… the private sector and communities have to provide the new conservation land. The extent to which they do so largely depends on economic incentives and the perceived risk of managing rhino.”


They conclude that a moratorium on hunting could also result in a drop in rhino prices and encourage owners to remove more of their animals.


The support for the continued hunting of white rhino is taken up by the man who arguably was largely responsible for saving the white rhino from extinction, Dr Ian Player. Dr. Player stated in an interview recently that in 1960 it was estimated that there were 60,000 black rhino in Africa, and only 600 white . By the end of Operation Rhino (of which Dr. Player played a central role), there were only a few thousand black rhino while white rhino numbers were growing rapidly. Dr Player commented, “What lead to this, and what people don’t understand – and don’t want to understand - is that in 1970, white rhino were placed back on the hunting list. That meant that game ranchers were able to buy [white rhino] and have hunters come and shoot them and pay a lot of money to do so. To the great credit of the ranchers, they were taking that money, buying more land and buying more rhino. The numbers of rhino shot were minimal, but what it meant was the habitat was being expanded all the time and that literally lead to an explosion of white rhino.”


Thanks to Operation Rhino, it is estimated that there are approximately 4,500 white rhino (or 23% of the world’s population) on 2.2 million hectares of private land in South Africa  (EWT). The combined habitat on private land is bigger than the size of the Kruger National Park.


In 1968 the Timbavati was one of the first recipients of white rhino under Operation Rhino. Initially 4 white rhino were introduced and over the next 5 years, we purchased a further 22 from the then Natal Parks Board. In 1994, prior to the removal of the ecological disaster that was the fence between the Kruger and Timbavati, our white rhino population had grown to 67. On removal of the fence we immediately lost 70% of our rhino to Kruger. So the Timbavati helped to stock the central KNP areas with white rhino. As the meta population in the Kruger expanded north, our white rhino numbers slowly recovered to such an extent that we believe we are close to territorial capacity. As we have no fence, all game found in the Timbavati (and the Kruger) is legally classified as “res nullius” or ownerless. Therefore the accusation that we are hunting Kruger rhino, from both a legal and logical standpoint, is absolute nonsense.  To the contrary, by removal of the fence, Timbavati helped to increase white rhino numbers in the central Kruger area.


When it comes to hunting, we will always encounter emotive arguments. Our management team have a duty to put emotion aside to make the best decisions based on the best scientific information available to ensure we uphold our objective to “promote the conservation of biodiversity for the sake of posterity, and to manage its ecosystem, landscapes & species populations to serve the ecological interests of the Timbavati and the Open System”.


My greatest fear regarding the uninformed anti-hunting activists is that their sentimentality for individual species, or even for individual specimens within a species, will have the unintended consequence of the decline or even destruction of certain species in the wild.


There are many animal rights activists and members of the public who criticise sustainable hunting without really understanding the harsh realities facing conservation in Africa. And then you get true conservationists who are involved with saving and protecting rhino all day, every day. The Timbavati is the latter and probably does more to protect rhino than any NGO or other private organisation. This comes at huge cost and needs to be paid for somehow.


The Timbavati has one of the most effective anti-poaching units in the world. This comes at a cost.  We have experienced field rangers (who receive paramilitary training), electrified alarmed fences, and vehicles for armed response. In additional there are costs associated with informants fees, fees paid to assist with intelligence gathering, improved firearms to counter increased firepower of poachers and legal fees to represent staff when they are involved in shooting incidents. And we have darted, micro-chipped and DNA-sampled more than 70 rhino in an on-going programme to aid law enforcement in curtailing the illegal trade in rhino horn. The list goes on…


When it comes to the war on poaching we are the Western Front. Not only do we protect rhino located within the Timbavati, we also protect a large number of rhino located in the western section of the Kruger National Park (KNP). We are a Buffer Zone to the National Park. The Timbavati works with the KNP on a daily basis to coordinate anti-poaching activities. We are on the ground, all day, every day protecting rhino at huge personal risk to our dedicated field rangers and management. Armed incidents with well-armed poachers are a regular occurrence.


Specialist independent scientific studies are undertaken for each species to be hunted which analyses the impact of any off-take of the species. From the study, a hunting protocol emerges, which dictates how and which individual specimens may be hunted. All animals removed from the Timbavati through hunting have to be under permit issued by the provincial conservation agency, after approval by the Kruger National Park . This is a lengthy and controlled exercise, and should the sustainability of any species, or any sub-group within a species, be under threat generally indicted by a decline in numbers, the process would prohibit the hunting of such species. The Timbavati would never allow hunting of a certain species if there was any negative impact, short or long term.


Dr David Mabunda, CEO of SANParks recently stated, ''We have a good relationship with the Timbavati Association, and they are excellent conservationists. Hunting in private reserves, contractual and provincial parks is allowed within the framework of provincial legislation and sustainable use of natural resources. This framework means that hunting can only take place if it is based on scientific studies, scoping exercises, aerial surveys and the granting of a permit to hunt by the department responsible for conservation. SANParks scientists and rangers are part of the process that determines [hunting operations]. We have reached an agreement with Timbavati and the other privately owned reserves that border the Kruger Park. This agreement states that the area would be managed according to the management plan that applies to the Kruger National Park. And our policy is open to the sustainable use of natural resources.”


Hunting of iconic species will always be emotive and unpopular to the many uninformed. People do not need to enjoy hunting, or to respect hunters. Rather they need to understand the enormous benefits that hunting – including the hunting of white rhino - brings to conservation, not only in the Timbavati, but to the whole of southern Africa.
Do we have a rhino hunting problem or a rhino poaching problem? We all agree we have the latter but to say that they are one and the same thing is simply ludicrous. Sustainable hunting of rhino is legal, and encouraged by environmental legislation and policy, generates revenue for general conservation activities and rhino protection and, probably most importantly, results in the expansion of rhino habitat and numbers.


We are constantly looking for alternative revenue sources to fund our conservation operations. The Timbavati regards itself as one of the few examples in Africa where photographic tourism and sustainable utilisation through harvesting are conducted within the same environment. The Timbavati does not regard these activities as mutually exclusive. Many of our landowners run successful lodges which generate conservation levies, but eco-tourism is not a panacea for all the challenges facing conservation in southern Africa, and the number of lodges that the Timbavati can sustain from an ecological and financial perspective is limited. It is generally accepted by reputable scientists that photographic tourism operations are more damaging to the environment than sustainable, well managed hunting operations. Simple anecdotal evidence from the Timbavati illustrates the point: it takes approximately 18,000 guest nights in lodges (or one guest staying for 50 years) to generate the same revenue that the Timbavati Association receives from one hunter shooting one rhino.


If you are a critic of rhino hunting, ask yourself “What have I done to save the rhino today?” and compare your answer to what the Timbavati does every day, all day.


Tom Hancock”
Copied from the Timbavati Private Nature Reserve website.
Follow the fray from here.
Posted by Brian at 3:44 PM